We woke to a snow covered car and cool temperatures again, but it didn’t deter us from exploring the Grand Teton National Park! After a hardy breakfast, we left the hotel and drove into the Park to continue our adventure.

We first headed up towards Mormon Row. New sites for me as we didn’t view this section of the Grand Teton Park in 2009. According to the Park website, this area was settled in the 1890s by Mormons from Salt Lake Valley. The settlers decided to build close to another to help share in the work load. Part of the work load was digging irrigation ditches to grow their crops. Some of the irrigation ditches still have water flowing through them to this day.

From Mormon Row we went onto the overlooks along Highway 89. My favorite views came from the Snake River Overlook. The clouds even lifted enough we could see the tops of the Teton range.

The Grand Teton Range photo I have hanging in my house as do my parents. Love how it came out!

Again, as with yesterday, a benefit to cold and snowy days, a lot of the areas we had to ourselves for viewing!

After we had our fill (if it’s even possible) of the views from the Snake River Overlook, we continued up Highway 89 to the Cunningham Cabin. Per the Grand Teton Park website, the cabin was built in 1888 and was lived in until 1895 when J.P. Cunningham built the main residence. The cabin then became a barn and smithy. Until the end of World War I the ranch was profitable and then the land was sold to the Snake River Land Company, who then donated the land to the Park.

Some of the views from the historic cabin – wow!

We continued northward on Highway 89 to the Jackson Lake and Dam. The amount of water they let through the Dam in Spring is impressive!

The Dam increased the natural lake’s total storage capacity to 847,000 acre-feet. Jackson Lake is the start of the Snake River.

On the way back to Jackson Hole we stopped at Jenny Lake on the way out of the Park. There is a visitors center, but we didn’t stop. We just walked around the Overlook area. There are also several hiking trails too.

Back to Jackson Hole

We made it back to our rooms at the Parkway Inn. Our parents decided to rest while we walked into town for take out supper. We ordered pizzas from Pinky G’s (#1 pizza joint in Jackson Hole) and while we were waiting for the pizzas to bake, we wandered around the Town Square area and Gray Crane Studios. Then the pizzas were ready and back to the hotel for food and rest for Day 3! 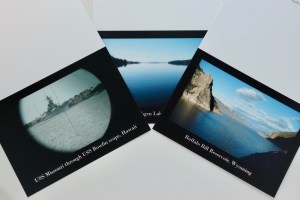